Recently I installed Visual Studio update 1 on few new azure VMs but when I started installing ASP.NET 5 RC1 Update 1, I got the below error. 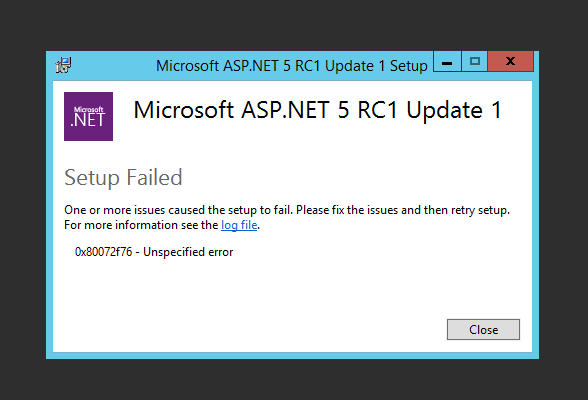 I tried to find the details on internet but not much information regrading this information. I saw some people find another Hash problem with this package but after looking it closely I found it different. Later when I looked into the log, I found the below details

The error shows that it is preparing to download some packages but failing to send the request to the URL and returning some crazy HTTP status code anyway . I checked quickly internet connectivity as soon as I saw this error but it was working fine and even I tried to download from the requested URL directly from browser and it was downloading the package correctly.

After spending some more time and doing here n there, I downloaded the packages from all the URLs where it was failing and installed directly on my machine. I had to install three packages in the same to all the machines where I was getting the issue. Then I installed the original package and it ran smoothly. You can find the URLs from the log by looking specific line where you have Error 0x80072f08: Failed to send request to URL .

Before wrapping up, let me tell you that I didn’t find this issue on one of my machines but got the same on rest four VMs and some were having Windows Server 2012 R2 and 2016 technical preview. Two were having SQL 2014 and VS 2013 installed before installing VS 2015 update 1 and the above 1. On the machine where It went smooth without any issue that was also having similar configuration but I was using it from long time. Just provided this information for completeness as all the environment were quite similar.

This is my personal weblog. All the contents in this blog are purely my personal opinion and do not reflect the views of my current and past employers. © Copyright 2016
Loading Comments...