For C# developers, Javascript has always surprised by its weird behavior. In this post, we are going to talk about one of the very common topics, equality check. In C#, we all have used == or != to check the equality and most of us using/used it in JavaScript in the same way. But in JS, it doesn’t behave as per the expectations each time. Because while doing the comparison, if the type of the values are different, then it internally converts it to the same type first, like if we do 0 == “0”, it will return true although number zero and string zero are not equal.  We have another option for equality check as ===. Let’s see the difference at a high level 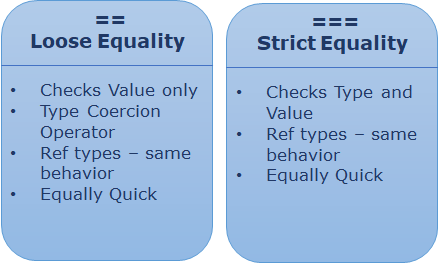 But before moving further, lets first see the primitive types in JavaScript. It is seven in total.

Everything else is of object type. Now let’s come to topic and start with loose equality

As from the picture, == doesn’t care about the type and just checks the value. When we compare the values of different types like a string with a number or number with a boolean etc, it first makes it to the same type by converting the one type to another and then does the comparison. It is also called Type Coercion.  So the return values are based on the content of a variable. Let’s see some examples

Here we can see in the first example, first value is string and another one is number (There is no type as int in JavsScript as mentioned earlier). Before comparing the value is also converted internally first and the comparison is done which returns true. Same can be seen in the second and third example. In the third example, true value is considered 1 in JavaScript so it returns true as well. In the last example as well, 0 is considered as false (even here is of type string) so both are false which returns true.
Similarly, we can use it’s opposite !=

As type-safety is one of the key features that we want from a programming language, we can use === for comparison in JavaScript. This checks type and value of both variables and accordingly produces the result. Lets see few examples

Here we can see that in the first two examples, the type (number for first and string for the second) and values both are the same so it returns true. In the last two examples, even the values are the same but the type (string and number, boolean and number) are different so it returns false.
This is an expected behavior that we normally want from a program so it is advisable to use === in the day to day coding although this looks little unusual and for a programmer who didn’t see it in past, (s)he may find this as mistake/typo so we may write comment on top of it unless we have included it in the coding guidelines.
It’s opposite the non-equality operator (!==) works as a non-strict equality operator as expected.

As discussed, we can see that although lots of places == is used for equality check and it works many times as expected, it is advisable to use === for equality checks. Although this can be achieved with == using and additional check of type of both values it doesn’t make any sense. Better to have coding guidelines to use strict equality operator.

This is my personal weblog. All the contents in this blog are purely my personal opinion and do not reflect the views of my current and past employers. © Copyright 2016
Loading Comments...