In one of my previous posts, I discussed about the synchronous and asynchronous programming model. We saw in details that how does it work in single and multi-threaded mode. This post is extension of that post and here we are going to discuss the two relatively new keyword async and await and how does that actually work. I got many questions around this so sharing it in details here. If you are not very clear about how synchronous and asynchronous programming works and how does it work in single and multi-threaded scenario then refer my previous post mentioned below.

Writing Asynchronous code with async and await is almost similar to writing synchronous code. All the other required basic activities like context switching, maintaining the thread state etc are taken care by the .NET framework for us. These keywords are provided on top of Task (TPL- Task Parallel Library) that got introduced in .NET 4.0. Writing asynchronous activities with these keywords are highly optimized, performance oriented and make the best use of TPL. We will understand that in detail in this post.

First let’s see some basics about using async and await in a program.

Many classes like HTTPClient, SyndicationClient, StreamWriter, StreamReader, Entity Framework and WCF provides asynchronous methods which can be used to leverage the asynchronous programming. With each release Microsoft adds capability with more operations. Lets see an example. 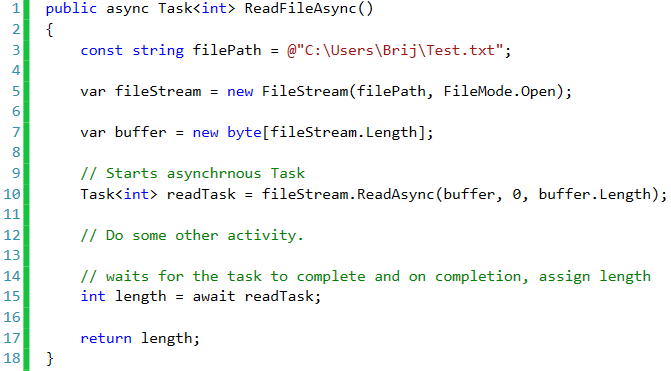 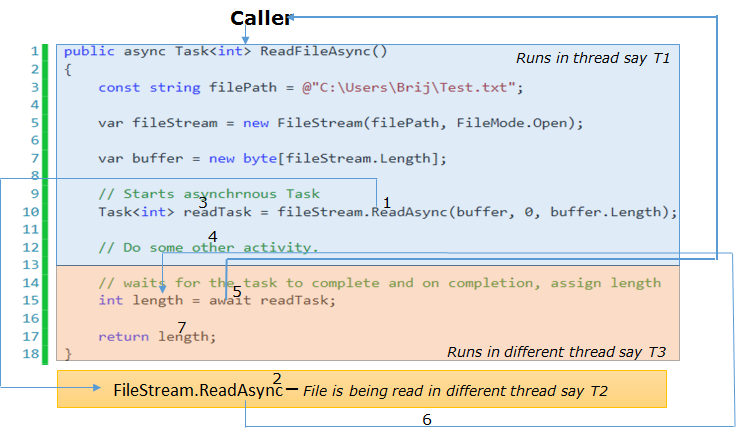 Here ReadFileAsync is called from any method then lets see how does the complete flow works based on the number provided.

Note – I have used three colors to represent that the above code that can run on three different threads (T1, T2, T3) for better understanding. But the .net run-time behind the scene tries to minimize the number thread to be used. Sometimes it runs in single threaded asynchronous mode (as discussed in my earlier post).

I hope it clarifies the working of async and await operators. Do share your comments/Feedback.

3 thoughts on “Asynchronous programming with async and await : explained”